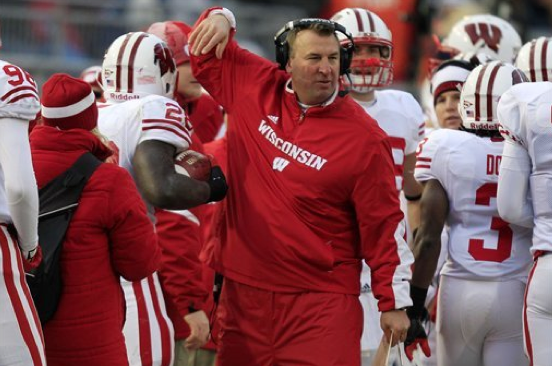 November 11, 2006. Wisconsin entered its game with Big Ten rival Iowa having lost four straight to the Hawkeyes. But first-year head coach Bret Bielema had the Badgers on a roll. Wisconsin marched into Iowa City with a 9-1 record, looking for historic win number ten. The Badgers jumped out early, scoring a touchdown and a field goal to lead 10-0 after the 1st quarter. Iowa answered with consecutive touchdowns to take the lead in the 2nd quarter, but Wisconsin regained the lead before halftime, 17-14. After a scoreless 3rd quarter, the big play of the game came on an amazing one-handed catch by Wisconsin’s Luke Swan. The 48-yard gain set up another Badger touchdown and set the stage for a 24-21 victory.

The Heartland Trophy, established in 2004 to honor the winner of the Wisconsin-Iowa game, now belonged to Wisconsin, and Bret Bielema became the first Big 10 rookie coach to reach 10 wins. Swan remembers giving Bielema the game ball after the victory.

“That was great. You could see tears in his eyes. He was loving it,” says Swan. “It was just a huge moment in his life and his career.”

The Badgers went on to whip Buffalo at home the next week, and beat Arkansas in the Capital One Bowl to give Bielema a 12-win season in his first year as Wisconsin head coach.