You are here: Home / Sports / Shining Moments in Badger History: Knocking off number one 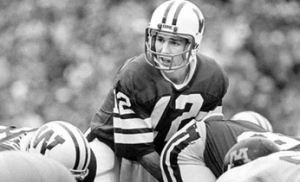 September 12, 1981. The powerful Michigan Wolverines came into the 1981 season ranked #1 in the country. And they had no reason to believe they’d lose that top ranking after their opener at Camp Randall. Michigan had outscored Wisconsin by a combined score of 176-0 in the previous four seasons. But the Badgers were ready to defend the home turf when the Wolverines rolled into town.

One of those Badgers was safety David Greenwood, from Park Falls. One of the top players to ever come out of Wisconsin, he had passed up a chance to play at Michigan, choosing to wear the hometown uniform instead. The game against the Wolverines is one he still remembers.

“It was pretty special. We kept our poise and kept plugging along, and before you know it, we had the game in the bag,” Greenwood says.

Wisconsin finished the day with a 21-14 victory over the nation’s top team. The Badgers went on to a 7-5 season that included a victory over #18 Ohio State and a trip to the Garden State Bowl.