You are here: Home / Sports / Shining Moments in Badger History: Victory over Northwestern 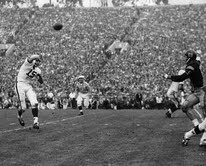 November 10, 1962. The Northwestern Wildcats came into their game at Camp Randall undefeated and ranked #1 in the nation, but Wisconsin was primed and ready for an upset. The Badgers were having a great season themselves, with a 5-1 record and a #8 national ranking. Their only loss had happened two weeks earlier at nationally ranked Ohio State.

Behind a strong performance by quarterback Ron Vander Kelen, Wisconsin jumped all over Northwestern. The Badgers led 21-0 early in the 4th quarter, and ended up rolling to a 37-6 win. Northwestern wide receiver Paul Flatley remembers the game well, and says the loss stuck with him.

“It was an embarrassment to get our rear ends beat. Vander Kelen was a teammate of mine with the Vikings. It took me a long time to warm up to him.”

The victory paved the way to make 1962 one of the best seasons in Wisconsin history. The Badgers reached #2 in the national rankings that year, won the Big Ten, and earned a trip to the Rose Bowl. Vander Kelen was named the conference MVP.