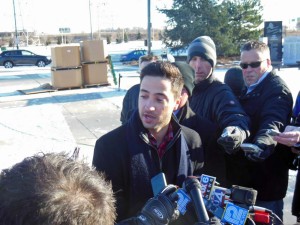 ending 65-game suspension in July for his PED connection to the Biogenesis clinic.

Braun passed on most difficult questions, saying he wouldn’t go into specifics about what he did.

Braun did reveal today that he met recently with Dino Laurenzi Jr., the urine specimen collector that he publicly attacked after winning an appeal of a positive drug trest following the 2011 season.

Braun had originally hammered Laurenzi in a media session at the start of spring training in 2012, suggesting he tampered with his urine sample.

Braun was speaking outside Helfaer Field this morning.  He had opportunity to explain his actions but declined.  Braun did say he made a huge mistake.

AUDIO: Braun said he made a huge mistake :22

AUDIO: Braun on what he regrets :10

Braun said he just isn’t going to continue to discuss things about his situation.  He said he’s looking forward to moving forward and wants to stay in Milwaukee with the Brewers.