You are here: Home / Sports / Bucks’ Sanders being investigated by Milwaukee police 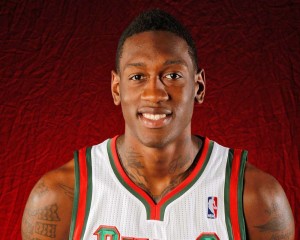 Cleveland.  Sanders injured his thumb in an off-court incident that is being investigated by Milwaukee police.

The Bucks released only a brief statement before the game.  “We are aware of an incident from Saturday evening.  The matter is under investigation and Larry Sanders is cooperating fully.  At this time we will have no further comment.”

Sanders is off to a slow start this season.  After signing a four-year, $44 million contract extension during the offseason, he is averaging 2.7 points, 3.7 rebounds in 17.5 minutes in the first three games.  Last season, Sanders averaged 9.9 points, 9.5 rebounds and 2.83 blocks.