You are here: Home / News / Christmas tree arrives to the Capitol 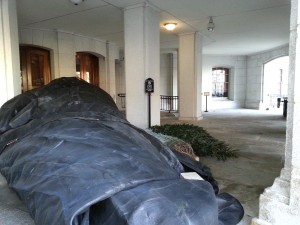 The State Capitol Christmas tree is now in Madison. Jim Draeger of Antigo provided the balsam fir, which is over 30 feet tall. He and his crew also harvested, loaded, and transported the tree to Madison from his place 175 miles north of Wisconsin’s capital city.

Stephanie Marquis is Department of Administration spokesperson. “Generally everything related to the tree is donated. Everything from the tree skirt to the ornaments that are put on the tree and even the tree stand gets donated. So really it’s a group effort from our citizens across Wisconsin.”

The conifer will be stored just outside the Capitol building until December second, when it will be brought inside, erected, stabilized, filled out with extra branches, and decorated. The balsam fir is usually chosen because of its ability to stay fresh for a longer period of time. It could remain standing until just after New Year’s Day. Smaller trees outside the Capitol building have been erected. They’ll soon be decorated with colorful lights. (PHOTO: Jackie Johnson)

Marquis says visitors can’t help but get a whiff of that recognizable scent. “Oh, it’s that wonderful, beautiful scent that you can’t describe where you can smell the freshly cut tree, the beautiful pine smell … and the balsam fir really has such a beautiful delicious scent.”

AUDIO: DOA spokesperson Stephanie Marquis says the tree is more than stats; it taps into our emotions. :40

The holiday tree will eventually be illuminated with energy-saving LEDs, which are also more durable and longer lasting. A train will encircle the base, and ornaments made by school children will decorate the branches with this year’s theme: Wisconsin traditions.

Thousands of visitors pass through the statehouse to see the tree during the holiday season.

The official tree-lighting ceremony with the governor has traditionally taken place on Friday — likely December 6th of this year.