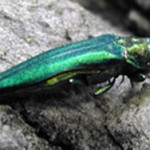 An unwanted pest has turned up in Madison. The city joins the growing number of Wisconsin communities where Emerald Ash Borer has turned up, and Melody Walker with the state Department of Agriculture, Trade and Consumer Protection believes it was only a matter of time. “With surrounding counties having infestations, eventually they will show up in Dane County,” she said.

The tree killing borer was first discovered in Michigan more than a decade ago and has been found across much of Wisconsin. “The way things are going right now, I would say eventually the state will be entirely infested,” Walker said.

Nearly 20 Wisconsin counties are now dealing with the effects the bug. Most are in southern Wisconsin, but EAB was confirmed in Superior, in far northwestern Wisconsin, this past summer. Walker said there’s no question of eliminating EAB.

“Eradicating plant pests is a really difficult thing to do,” she said. “The goal is to control things to a manageble level.” Emerald Ash Borer is spread primarily by hitching a ride about firewood, and DATCP and the Wisconsin Department of Natural Resources have an ongoing effort to discourage people from getting wood in one area and bringing it in to another.