You are here: Home / Crime / Courts / Arrests made in man’s disappearance 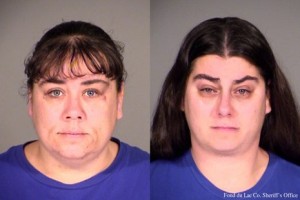 Fond du Lac Police have arrested two women in connection with the disappearance of 37-year-old Timothy Nance. The missing man’s wife, 37-year-old Eve Nance, and sister-in-law 33-year-old Tina Ewell are facing charges of hiding a corpse and resisting or obstructing.

Assistant Police Chief Steve Klein said police suspect Nance is dead, based on evidence and statements. Nance is still missing and Klein said his department needs help to locate him or his body. He noted that the start of the nine-day gun deer season will provide a lot of extra eyes. Anyone with information should call Fond du Lac Police at (920) 906-5555.

Timothy Nance was last seen on November 1 in Fond du Lac. His wife reported Nance missing on November 5. He has been known to visit the Milwaukee, Oshkosh, and Appleton areas. Nance is African-American, 5’3″ and 150 pounds with a medium build. He has the name “Eve” tattooed on his neck, and the name “Tameka” tattooed on his back and right arm. He also has a tribal tattoo on his left arm.