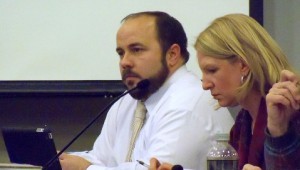 In front of a packed legislative chamber the Fond du Lac City Council voted Monday night against amending the City’s housing discrimination ordinance to include the protection of transgenders. Nearly 75 people spoke on the change that would have included the words “gender identity or expression.”

“No one should be discriminated against, and if there is discrimination in housing . . . then this law is definitely needed,” said Sister Stella Storch, who spoke in favor of the ordinance change proposed by city councilman Dan Manning.

Former City Councilman Rob Vande Zande accused Manning of having an agenda. “Are you bringing this up because your are openly gay? If that’s the sole purpose, then your mindset on why you are on the city council is totally wrong, and you need to step down from this position,” Vande Zande said.

Manning said his only agenda was to try and make the City a better place to live. “I have no doubt that the current city staff that we have would vigorously pursue any discrimination complaint based on gender identity and expression, but that may not be the case with the next leaders here in Fond du Lac,” said Manning.

The vote was 5-1 to deny the change with Councilwoman Catherine Block abstaining. She felt more time was needed on the issue.