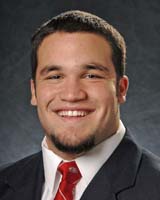 John Moffit has left pro football because he has lost his love for the game.

Moffitt, who is in his 3rd season out of Wisconsin, called the Broncos from his home in Seattle this week to let them know he wouldn’t be returning to Denver following its bye week.

Moffitt told A.P. reporter Arnie Stapleton, “I just really thought about it and decided I’m not happy.  I’m not happy at all.  And I think it’s really madness to risk your body, risk your well-being and risk your happiness for money.”

The Broncos acquired Moffitt back in August (Aug. 20) from the Seahawks after he’d lost out on one of the two starting guard spots with the Seahawks during training camp.

Moffitt said he doesn’t have a history of concussions, but he acknowledged all the blows he sustained in practices and games concerned him.