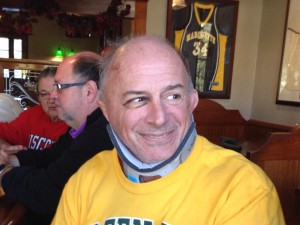 Nick Bohr, WISN TV, reports Steve “The Homer” True has been released from the hospital.

The popular Milwaukee talk show host and commentator was injured in an automobile crash Wednesday morning after another driver ran a red light. The radio guy and Marquette basketball play-by-play man was taken to Froedtert Hospital on Wednesday night in critical condition.

Bohr reported on Wednesday evening TV news the 59-year-old radio veteran was struck by a suspected drunken driver in Milwaukee just before 10:00 a.m. and sustained a serious head injury.

Bohr tweeted Friday afternoon that Homer has been released from the hospital, and that Homer said, “I never thought I was critical.”

Happy to report that @espnhomer has been released from the hospital. Says “I never thought I was critical.” pic.twitter.com/Dn4XJbQ9in

Many folks shared (and continue to share) their concerns and well wishes on twitter upon hearing the news about the senseless crash.

wanted to thank all the people who worried about me Not perfect, but getting better and I am home.