You are here: Home / Sports / Hyland shoots for career win #400 on Saturday

When you talk about Saint Mary’s Springs football, the name that comes to mind 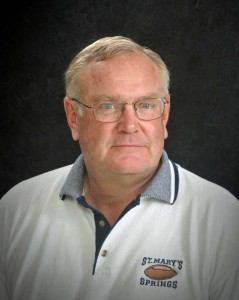 The Ledgers will meet Darlington in a WIAA Division 6 State Semifinal (Level 4) game in Middleton on Saturday afternoon.

Hyland isn’t one to look for a slap on the back, but what he’s done at Saint Mary’s Springs (Fond du Lac) is nothing short of remarkable.

Hyland enters Saturday’s game with 399 career wins, more than any coach in Wisconsin state history.  The Ledgers have won 39 straight games, which is the 9th longest win streak in the nation.  The last time Springs lost a game was a 6-3 setback against Edgar in the 2010 D-6 State Championship game.

As you would expect though, getting Hyland to talk about the streak or his record is like pulling teeth.

Hyland’s current record stands at 399-101-2.  His next win is #400.  And if the Ledgers can make Saturday’s game against Darlington #400, then Hyland will be seeking another State Championship.

Hyland is pretty good at that as well.  His next state title will be his 13th.  Hyland’s current resume includes: