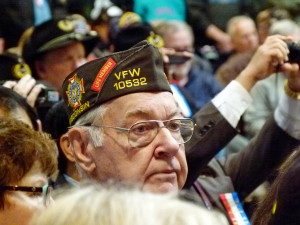 Paying tribute to military veterans across our nation.

Nearly 400,000 veterans are living in Wisconsin.

Wisconsin Department of Veterans Affairs (WDVA) Secretary John Scocos says the agency’s role changes as demographics change. “Our department is increasingly finding ways to reach out to our veterans, whether it be the interactive chat part of our outreach at our veterans resource center we established a year ago. We’ve had over 8,000 calls to that center.”

Scocos touts his department’s outreach programs — the employment fairs, its efforts to deal with drug and alcohol issues, traumatic brain injuries, and mental health issues. He acknowledges the need to more closely address PTSD and suicides. Some estimates show 22 veterans a day nationwide take their own life. “We are working with other state agencies and obviously the federal VA to try to combat suicide as much as possible. We’ve seen that if we don’t reach out to that veteran within the first six months in the issues he or she might have, we’ll probably lose that veteran.”

AUDIO: U.S. Department of Veterans Affairs Deputy Assistant Secretary of Intergovernmental Affairs John Garcia spoke at a Veterans Day ceremony, “Operation Dustoff,” at Wisconsin’s state Capitol on Friday. He said during the ’60s and ’70s young men and women went to war, only to return as isolated and unwelcome individuals. Going to war was brutal, he said, but so was the alienation of coming home. 1:11 mp3 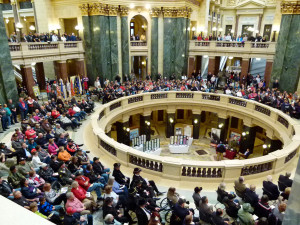 Scocos says it’s important to not only ensure veterans are recognized and respected, but that they take advantage of opportunities afforded them in Wisconsin – “the best state for veterans in the country.”

AUDIO: At the Operation Dustoff ceremony in the state Capitol rotunda, Secretary Scocos pays tribute to all military veterans, especially those who served in Vietnam. 1:11

Veterans Day is often confused with Memorial Day, though not the same. Veterans Day observes the service of all U.S. military men and women, while Memorial Day is a day of remembering those who’ve died while serving their country.