You are here: Home / Packers / Packers fortunes may depend on Rodgers 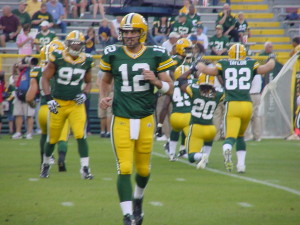 Packers opening series and left the game, not to return.  The Chicago Bears went on to pull out a 27-20 win, ending the Bears 6-game losing streak against the Packers in the series.

When Rodgers left, longtime backup Seneca Wallace hit the field for the first time as a Packer.  Wallace struggled, going 11 of 19 for 114 yards and 1 interception.  Not even another solid running game could help Wallace in this one.

The Packers ground attack hit the Bears for 199 yards.  Eddie Lacy had 150 yards by himself on 22 carries.

But the Packers defense was a no-show.  That defense entered the game ranked 9th in yards allowed, but managed to give up 442 yards, including 171 yards on the ground.

AUDIO: Mike McCarthy defense didn’t play as well as they needed to :21

The Packers saw their 4-game win streak come to an end.

Chicago’s last drive was the straw that broke the camels back.  They started from their own 1 with 9:48 left to play.  When the Bears were done, they kicked a field goal to take a 7-point lead and they left just 53-seconds for the Packers to try to answer.

Before Monday night, Aaron Rodgers had missed only two games as the Packers’ starting quarterback, once in 2010 due to a concussion and once in 2011 to rest.

While the defense didn’t play well, it’s pretty clear just where the Packers stand if they lose Rodgers.

The rematch is Dec. 29th, (week 17) in Chicago.  Just where the Packers stand by the time we get to that point will greatly depend on how fast Rodgers can return to action.  We’ll find out more about Rodgers fate later today.