You are here: Home / Packers / Packers settle for tie, Flynn saves the day! 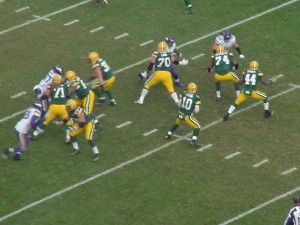 goes along with it, they have a strange way of showing it.

Not only did the Lions and Bears lose, the Green Bay Packers settled for a 26-26 tie with the Minnesota Vikings.

The Packers trailed 20-7 when Mike McCarthy made a quarterback change, benching Scott Tolzien and bring in Matt Flynn.  Flynn rallied the Packers with 16 points to tie the game in regulation and another three points in overtime before the two teams settled into a tie.

Flynn finished 21 of 36 for 218 yards and a touchdown, becoming the fourth quarterback to play for the Packers in as many weeks.

Tolzien was given one series in the second half, but a three and out was enough for Mike McCarthy to make the move.

Tolzien was 7 of 17 for only 98 yards.  He did scramble for the Packers only touchdown prior to his departure.  But it was clear the Packers needed a lift and that’s exactly what Flynn gave them.

AUDIO: Mike McCarthy on going to Matt Flynn at QB :17

The Packers didn’t win the game with Flynn, but his efforts managed to avoid a loss.

Three years ago, Flynn came on in relief and followed that up with an outstanding outing at New England in a game the Packers almost won.

The Packers haven’t named their starting quarterback for Thursday’s game against Detroit yet, but assuming it’s not going to be Aaron Rodgers, one would assume Matt Flynn would get the shot against the Detroit Lions, working on a short week.