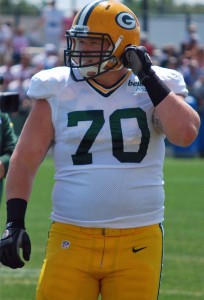 The three-game slide is the first for the Packers since the 2008 season.

Making his first professional start, Scott Tolzien threw for 339 yards but was picked off three times with no touchdown passes.

But Tolzien certainly can’t take all the blame for the loss.  The Packers struggled both running the ball and stopping the run.  Missed tackles were once again part of the equation, so were penalties, blown coverages and a fake punt call that ended up a half-yard short.

Eddie Lacy was held to 27 yards on 14 carries and the offensive lineman weren’t on the same page.

It all leads to a 5-5 record, their worst 10-game start since 2008, the year the Packers finished 6-10 in Aaron Rodgers first year as a starter.

There’ll be plenty of fans calling for the Packers to switch quarterbacks this week, but going with Matt Flynn over Scott Tolzien wouldn’t make a lot of sense if all of the other problems aren’t fixed.  Not to mention, like it or not, Tolzien gives the Packers some continuity at this time.  Until Aaron Rodgers comes back, Tolzien is throwing the ball well enough for the Packers.  He just needs to clean up the interceptions.

The interception that Jason Pierre-Paul made on Tolzien and took back for a touchdown, when is the last time the Packers made a play like that.

There’s no question the Packers miss Aaron Rodgers, but they need to pick themselves up and start making plays, or it’ll be too late for once he eventually returns.

The Packers converted third downs on just 2 of 8 attempts and the combination of Eddie Lacy and James Starks combined for 1.6 yards.

The Packers host the Vikings in a Noon game at Lambeau Field this Sunday.  The Vikings haven’t won a single game on the road this season and their quarterbacks have struggled as well.  The Vikings lost to Seattle on Sunday 41-20.