You are here: Home / Sports / Redd to retire a Buck

Michael Redd will officially retire as a member of the Milwaukee Bucks.  A brief 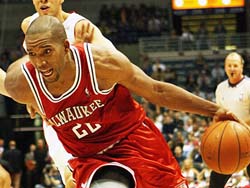 ceremony will take place between the first and second quarters of tonight’s game between the Milwaukee Bucks and Cleveland Cavaliers at the BMO Harris Bradley Center.  Redd is expected to address the crowd in attendance tonight.

Redd played 11 of his 12 NBA seasons with the Bucks.  The former Ohio State standout averaged 20 points, 4 rebounds and 2.3 assists a game during his career.

Redd was drafted by the Bucks with the 43rd overall selection in the 2000 NBA Draft.  He was part of three postseason appearances and was named as a reserve on the 2003 Eastern Conference All-Star team.

Redd was also a member of Team USA’s 12-man roster for the FIBA Americas Championships in 2007 and a member of the Gold Medal-winning Team USA squad at the 2008 Beijing Olympics.