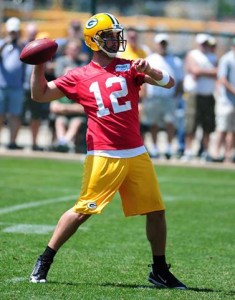 Rodgers landed on his left shoulder when he was sacked by Bears defensive end Shea McClellin on the game’s opening series.

Rodgers was 1 of 2 on the game’s opening drive.  But his sack by McClellin forced a field goal and Rodgers wouldn’t return.  Seneca Wallace took over and struggled going 11 for 19 for 114 yards and an interception.

Rodgers has missed just two games as a Packers’ starter.  In 2010, he missed a Week 15 game at New England after suffering a concussion the week before.  Rodgers also sat out the 2011 regular-season finale, when the Packers opted to rest Rodgers against the Detroit Lions.  In that game, Matt Flynn passed for 380 yards and six touchdowns.