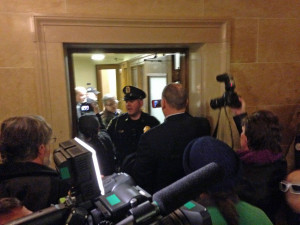 Yet another chapter in the seemingly interminable Capitol rotunda protests played out on Tuesday, as a handful of activists delivered complaints charging Capitol Police with violating the constitutional rights of citizens who gather to sing and observe in the space. “We really feel like we are the victims,” said Jerry McDonough, after the group had delivered the complaints to the Capitol Police office in the Capitol basement. “What we were doing is exactly what the rotunda is designed for.”

McDonough suggested that the complaints might “go away” if Capitol Police would agree to drop the tickets which were written against protesters earlier this year. “There’s massive amounts of efforts going into prosecuting this, to dealing with this through the system in the courthouse,” said Bob Syring. “It is foolish, it is silly, it should all just go away.”

A spokesperson for the state Department of Administration had not seen the complaints and could not provide comment or context. However, Stephanie Marquis did refer to the October agreement between the ACLU and the DOA. Under the terms of that deal, groups of fewer than 12 people do not need to obtain a permit to protest or gather in the Capitol. Groups of 12 or more people have to request a permit for their event from the DOA or simply give notice to the state that they plan to meet in the building.