You are here: Home / News / Search underway for missing teen in Waukesha County 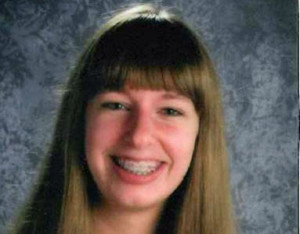 The Waukesha County Sheriff’s Department is asking for public help in the search for a missing teen. At a press conference this morning, Inspector Eric Severson said 15-year-old Kathryn Stalbaum has not been seen since leaving for Kettle Morraine High School Tuesday morning. She had apparently texted a friend that she had missed the bus and would be riding her bike. She never arrived at school and Severson said they have so far been unable to confirm that she has been seen anywhere since that time.

“She has a good relationship with her family. She is a communicative person who keeps her family apprised of what she’s doing, so it is out of character for her to be out without having regular contact,” Severson said. “As of right now, I don’t have any information that leads us to believe that at a certain date and time, we know Kathryn was here. That’s frustrating us a little bit. We have not been able to locate the bike, either.” The sheriff’s department is asking anyone in the area who has surveillance cameras that may have been on around the time Kathryn went missing to please call.

Kathryn Stalbaum is about 5’7′, 120 pounds, has long brown hair, blue eyes, has braces and wears contacts. She could have been riding a teal woman’s frame Schwinn Mountain Bike and she may have a teal back pack.