You are here: Home / Military / Sending holiday mail to heroes 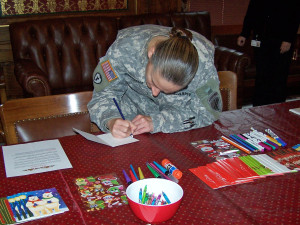 The Red Cross is once again collecting cards for soldiers. (Photo: WRN)

Wisconsin residents are being urged to send in some Holiday Mail for Heroes.

Every year, the American Red Cross collects cards from the public, which are then sent to members of the military who can’t be home for the holidays. Tom Mooney, the Western Wisconsin Chapter Executive for the American Red Cross, says the program has touched the lives of many soldiers and veterans, with more than 6.5 million cards sent to service members since the effort began seven years ago.

Mooney says cards sent to the Red Cross this year will go out to soldiers currently on active duty overseas, as well as veterans at VA hospitals and living in homes across the state.

Wisconsin National Guard Brigadier General Mark Michie says the cards can make a world of difference to a soldier serving far away from home during the holidays. “This is a very lonely time of year for a service member, so to have cards that come in from people that you don’t know, to show that level of support, is invaluable.

Cards must be postmarked by December 6th. They can be sent to: