You are here: Home / Sports / Shining Moments in Badger History: Rivalry for the axe 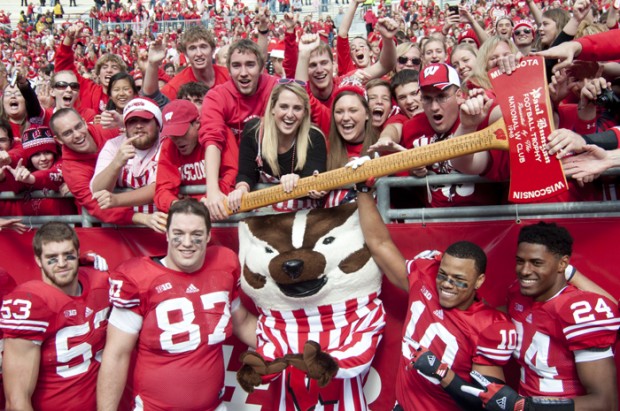 The most-played rivalry in Division I football continues this weekend when Wisconsin and Minnesota square off for Paul Bunyan’s Axe. The series goes back to 1890.  The trophy was first given out to the winner of the game in 1948, and since then it has become a symbol of one of college football’s fiercest rivalries.

Over the years, Axe Week has featured some of the Shining Moments in Badger history. Billy Marek rushed for over 300 yards and five touchdowns against Minnesota in 1974. Anthony Davis did it again in 2002. Darrell Bevell threw for over 400 yards in 1993. Clarence Bratt picked off four Gopher passes in 1955, and that’s still a school record.

Former Wisconsin linebacker O’Brien Schofield says the game with Minnesota was always about more than bragging rights for a single year.

“Once you understand the history of the game, and how long this rivalry has been, it’s amazing,” Schofield says. “To know you’re a part of history, that’s so exciting.”

Before it was Paul Bunyan’s Axe, the teams played for the coveted “Slab of Bacon.” The Badgers are the current owners of the Axe, after beating Minnesota last year 38-13.

Shining Moments in Badger History are brought to you by Marshfield Clinic.
Shining Moments radio feature for 11-18-13 Overall history of rivalry with Minnesota