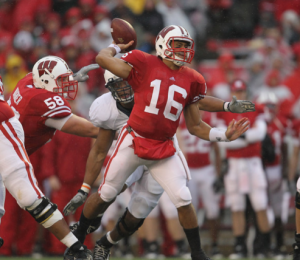 November 26, 2011. The #15 Badgers entered their last regular-season matchup with a chance to make history by playing in the first-ever Big Ten championship game. To get there, they’d have to go through #20 ranked Penn State at Camp Randall.

Instead of the close game fans expected, the day turned into an easy win for the Badgers, who stunned the Nittany Lions with a 45-7 victory. The Badgers’ 28 points in the first half were more than Penn State had given up in a game all year.  Montee Ball rushed for 156 yards and four touchdowns, and quarterback Russell Wilson passed for 186 yards and two more scores in the blowout victory.  Coach Bret Bielema praised Ball and Wilson after the victory, calling them, “two of the most complete players at their respective positions that I’ve ever seen play the game.”

For Wilson, the unexpectedly easy victory was just one of many shining moments as a Badger.

“I could give you a long, long list of different, great moments I’ve had with these guys,” Wilson says, “and I always will remember and will always cherish.”

The memories got even sweeter in the next game against Michigan State, as the Badgers avenged an earlier loss to take the Big Ten title, 42-39.

The following video features highlights from the game: