You are here: Home / News / Walker calls for special session of legislature 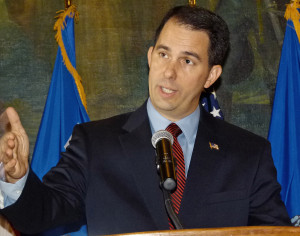 Governor Scott Walker wants lawmakers to give 77,000 state-funded health care recipients three more months to sign up for ObamaCare, before they get cut off from BadgerCare coverage at the end of the year. Wednesday, federal officials said only 877 Wisconsinites bought coverage on the online exchange in its first month.

“Aside from the politics of this, the bigger issue to me is there are real people in this state who are gonna be affected by these decisions and we wanna make sure that those real people get every possible access point to health insurance.”

Walker will extend the state’s BadgerCare coverage until March 31, to give Washington more time to work out the glitches on Healthcare.gov.

“My hope is — and I think the expectation is — that with that additional three months that will be enough time for the federal government to make sure that the website and the program itself is fully operational, fully in place and that we don’t have people falling through the cracks.”

Speaker Robin Vos supports the general idea of giving the feds three more months to “get their act together,” but he’s “incredibly skeptical” they could do it. Senate Majority Leader Scott Fitzgerald said he would only support month-to-month extensions — not a full three-month delay. The special session would not be scheduled before Thanksgiving.