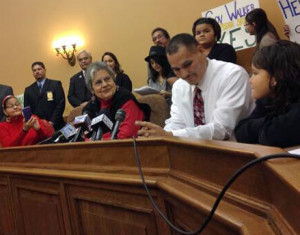 Tribal officials gather at the state Capitol for a press conference in support of the Kenosha casino.

The still unresolved issue of a new Indian casino was one of the top stories of 2013. The federal Bureau of Indian Affairs approved the Menominee Tribe’s application to build a casino at the defunct Dairyland Greyhound Park in Kenosha, putting a decision in the hands of Governor Scott Walker, who sought a win-win.

“I’ve got two other tribes, the Potawatomi and the Ho Chunk, who raise very legitimate concerns about the potential revenue loss which would in turn potentially lead to job loss at those two sites, and so I’m trying to figure out some way to balance the two out,” Walker said.

The Forest County Potawatomi operate the state’s most profitable casino, in Milwaukee, and spokesman George Ermert said the Kenosha area falls within Potawatomi ceded territory. “For one tribe to go on another tribe’s historical lands is a very, very big deal,” he said.

The Menominee signed a development deal with the Florida based Hard Rock group, and Menominee Tribal Chair Craig Corn argued the project was also a big deal for his tribe – the state’s poorest – as well as the Kenosha area.

“We have not had any discussions with Governor Walker or his staff, but we welcome the opportunity to help him with that creative solution,” said Corn in early November.

Just last week came the latest development – the hiring a of a national law firm with a large Indian law division, to review the project. Walker said a lot of work needs to be done before he can make a final decision – fueling speculation that the decision might not come until after next November’s elections.