You are here: Home / News / A fine brine for icy roads 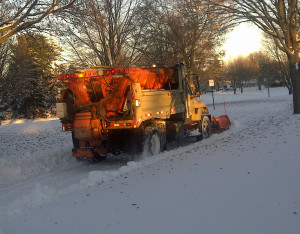 There’ a new weapon in the war on icy roads. It’s cheese brine, a byproduct of the cheesemaking process. The idea of mixing the salty waste product with rock salt applied to roads originated in Washington state, and Polk County, Wisconsin has been using it since 2009.

“What we found here in our studies is that brine has a certain amount of organic material left in it, and that allows it to remain unfrozen at a lower temperature than regular brine that you would manufacture,” said Highway Commissioner Steve Warndahl. The cheese brine treated salt also adheres better, and melts ice faster. And at about eight cents a gallon, it’s a good deal for taxpayers.

“Wisconsin is definitely a dairy state, and several counties that I know of have started to use the same product,” said Warndahl. Also getting on board the cheese brine bandwagon this year is the city of Milwaukee, which partnered with Polk County’s F&A Dairy Products to pick of 600 gallons of the salty brew. The recipe is 8 gallons of brine for every ton of salt. And no, it doesn’t smell funny. “That’s the question everybody asks,” Warndahl said. “It has a little bit of odor to it, but when you disperse it on the highway you can’t smell it at all.”