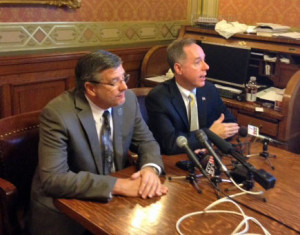 With the Assembly on the floor to take action on state Medicaid health care plans, Republican leadership used the opportunity to assail the failings of Obamacare. They’re portraying the action – to extend BadgerCare coverage for some 72,000 state residents while delaying it for more than 80,000 childless adults – as something they’re being forced to do by the failings of Obamacare.

“It’s not Wisconsin’s job to continue to prop up the federal government’s exchange, but we want to help people make sure that they have every opportunity to be on it,” Assembly Speaker Robin Vos said in a press briefing prior to lawmakers taking the floor.

Those now on BadgerCare will be able to keep coverage until April 1st. “At that point the pressure needs to be on the federal government,” said Representative John Nygren. “We can’t continue in Wisconsin to be the ones that are stepping and correcting their mistakes.”

Democrats have been critical of the plan because of the added delay for poor, childless adults to access coverage under the state’s BadgerCare Plus program, but Vos brushed that aside. “Maybe the only criticism I will take is that we believed the president,” he said. “The president told us that the exchanges would operational by October. We now know that he basically lied to the American people.”

“The governor made a promise, and you are looking to break it today, and that is shameful,” said minority leader Peter Barca of the delay in covering those childless adults. Governor Scott Walker called lawmakers into special session in reaction to the disastrous Obamacare roll out. The Medicaid package passed Wednesday 64-32 with 5 Democrats voting in favor. The state Senate is scheduled to act on later this month.