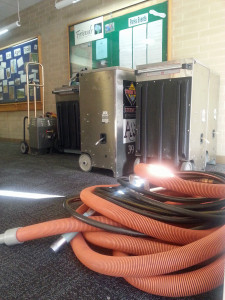 Plumbers and a clean-up crew were on site Tuesday working to quickly repair the damage, which a DNR spokesman says was the result of subzero temperatures causing a pipe to burst in the building’s HVAC system. A cost estimate is not yet available.

As of Tuesday afternoon, the state had closed the building to all staff because of concerns that fluid from the heating and cooling system could pose a health risk to workers. The state did expect to have the building returned to normal operations by Wednesday morning.

A state Natural Resources Board meeting scheduled for Tuesday and Wednesday has been moved to an adjacent state office building.