You are here: Home / Business / Fast-food walk-out to protest wages 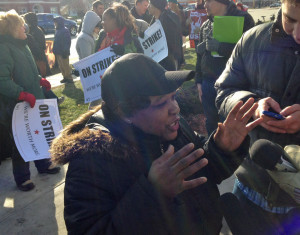 Thousands of fast-food and retail workers walked out in cities across the nation on Thursday, including Milwaukee and Madison, in an effort draw attention to the challenges they face and to advocate for higher wages. In Madison, workers and supporters rallied outside a Taco Bell restaurant on East Washington Avenue, before going inside and escorting out two employees.

“We work very hard at these restaurants,” said Quanta Smith, one of the Taco Bell employees who makes about $8 an hour. “It’s not minimum wage, but it’s like minimum wage” said the mother of four. “I would love to find a higher paying job,” said Smith’s co-worker Sean Lane. “Unfortunately those jobs don’t exist right now. I make $8 an hour . . . I just ended last month, before my most recent check, with eight dollars in my bank account.”

Advocates are calling on the fast-food industry to pay workers $15 an hour, with benefits. “They won’t be requiring the SNAP benefits, they won’t be requiring Section 8 housing, they won’t be dependent on free and reduced lunches for their children, they won’t have to work multiple jobs in order to take care of their family,” said Representative Melissa Sargent (D-Madison), who noted that Republicans have touted their desire to move people from dependence on government programs to independence.

Brenda Gomez is a manager at a Madison McDonalds. She makes $10.50 an hour, but works fewer than forty hours a week and pays for her own health insurance. “I still have to struggle. I still have to be on food support, I still have use the food pantries. If I was making $15 an hour I wouldn’t have to be using those government subsidies,” Gomez said.

Courtney Gardiner of Madison was another McDonalds employee who rallied outside the Taco Bell. “I’ve been at McDonalds over a year-and-a-half now. I make a little over $7 an hour,” said Gardiner. “It’s not enough to survive off of.”