You are here: Home / Fires/Accidents/Disasters / Fire tears through downtown Ripon 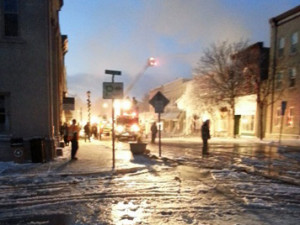 Ripon’s historic downtown area is expected to be closed for most of the day, while three retail buildings continue to smolder from an early morning fire. Firefighters were called just before 3 a.m. to a trio of two-story brick buildings, where four businesses and five apartments were damaged by fire and smoke.

The blaze occurred on Watson Street, just a couple blocks from the Ripon College campus. The cause remained under investigation at late morning.

Authorities said about 20 residents of upstairs apartments were evacuated, many of them children. All were accounted for, and no injuries have been reported.

Ripon Fire Chief Tim Saul says nearly 75 firefighters from at least 15 other departments helped put out the fire. That includes the local Red Cross, which is helping at least five families that have been displaced.