You are here: Home / Packers / Flynn preparing to start for the Packers on Sunday (Audio) 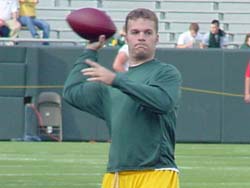 practice on Wednesday and he’ll most likely be the starter when the Packers meet the Atlanta Falcons on Sunday at Lambeau field.

Aaron Rodgers practiced on a limited basis and still holds out hope of returning this week or soon soon-there-after, the Packers at this point are counting on Flynn to be the one that leads them through the final month of the season with the thought of catching the Lions and Bears for the division title.

Rodgers underwent a scan on Monday and Dr. Pat McKenzie didn’t like what he saw, so Rodgers hasn’t been cleared to play.  Even though Rodgers is practicing, it would appear a decision as to who will start this week has already been made.

Flynn received minimal reps last week in preparations for the Lions game.  With a full week of practice this week, Flynn will be fully prepared to carry out the game plan against the Falcons.

AUDIO: Jordy Nelson says they can win with Matt Flynn :18

Last week, the Lions loaded the tackle box and invited Flynn to throw the ball down field.  Not only didn’t that happen, but Flynn was sacked seven times by the Lions.  He completed just 10 of 20 passes for 139 yards and an interception.

AUDIO: Flynn said they have to make the defense respect the pass :12

It’s almost a certainty that the Atlanta Falcons will follow suit and focus their attention on running back Eddie Lacy.  It’ll be up to Mike McCarthy to devise a game plan that will allow Flynn to get the ball out to his receivers and let them make plays.

AUDIO: Flynn is confident he can lead the Packers down the stretch :23

Kickoff time against the Falcons on Sunday is 12:00 at Lambeau Field.