You are here: Home / News / Grievances aired at Festivus event, mostly toward governor 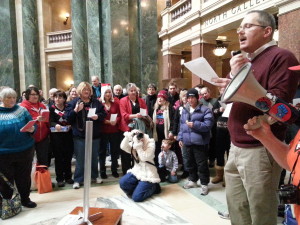 Festivus organizer Greg Gordon speaks to the crowd of about 100 individuals in the Wisconsin Capitol rotunda (PHOTO: Jackie Johnson)

Airing grievances at an observance of Festivus at the statehouse, mostly aimed at the governor and his Republican party.

The tradition of Festivus — the made-up holiday on December 23rd “for the rest of us” — gained its fame from that 1997 episode of Seinfeld. It begins with the airing of grievances.

AUDIO: ‘Festivus is Here’ is sung to the tune of ‘Christmas time is Here’ from the Charlie Brown TV special. 1:22 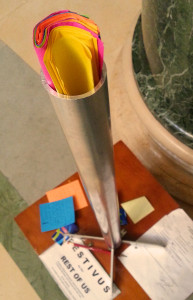 Dozens of folks gather around the table-top Festivus pole in the Capitol rotunda to sound off. Most complaints are aimed at Governor Scott Walker and his policies, but the crowd also hears about eggnog — there’s not enough in the world, the homeless problem, Percy Jackson movies not being as good as the books, the Capitol Christmas tree vs holiday tree issue, disappointment in not winning the lottery, and media censorship.

AUDIO: One woman keeps it light, suggesting beer glasses need to be larger to accommodate more of the malt beverage. :06

Feats of strength — another element of Festivus after airing grievances — is not allowed in the statehouse because of “liability issues.” The holiday is celebrated by those frustrated with the commercialism and pressure of the Christmas holiday season.

The aluminum pole is displayed on a small table in the Capitol rotunda — along with the traditional nativity scene, a menorah, and the official Christmas tree.

Gordon took out a permit for the Festivus event back in April.