You are here: Home / Packers / Long wait is over for Rodgers 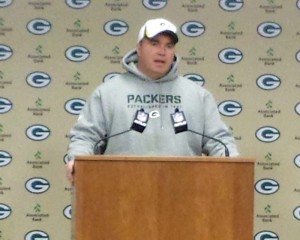 Rodgers has been cleared to play on Sunday against the Chicago Bears.  Mike McCarthy told his team the news on Thursday morning, then told the rest of Packers nation on Thursday afternoon.

It’s been a difficult process for Rodgers, working hard during practice and building his hopes up, only to be shut down by the teams medical staff at the end of every week.

Green Bay’s fan base now expects the Packers to not only win Sunday, but make a deep run into the playoffs.  The players are hoping to make a long run themselves, but offensive lineman Josh Sitton said first things first.

Rodgers took snaps with the Packers offense for the last several weeks.  While its expected that he would be somewhat rusty, he feels the work he’s received should minimize that.

One thing the Packers are concerning themselves with heading into the Chicago game on Sunday is the thought that Rodgers return doesn’t guarantee victory.

The decision makers (Ted Thompson & Mike McCarthy) didn’t say if Rodgers is 100% or not.  But clearly, they’re confident that Rodgers is far enough along to throw him in the game and let him go.

When asked if there’s still risk involved, McCarthy said, “Rodgers has accepted the risk part – landing on the shoulder and suffering a displaced fracture is one – ever since he started practicing three weeks ago.

“Every football player that plays in this game Sunday will have risk, and I think we all understand that,” he said.  “We’ve done our due diligence, we’ve gone through all evaluations, and we feel it’s time Aaron is ready to play.”

Rodgers will face the 29th ranked defense in the league on Sunday, (32nd against the run).  The winner gets the NFC North division title and a home game in the playoffs.  To the loser, the chance to clean out their lockers early, on Monday.