You are here: Home / Packers / Matthews listed as out for Bears game 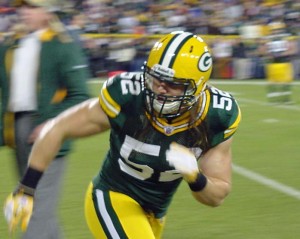 Chicago against the Bears.

Matthews suffered an injury to the same right thumb that he originally fractured back on Oct. 6.

With Matthews out, Mike Neal and Andy Mulumba will take over at outside linebacker in Matthews place.

The Packers didn’t practice on Wednesday but were required to put out an injury report.  Quarterback Aaron Rodgers was listed as a limited participant, while Brad Jones, Nick Perry, Mike Neal and Ryan Pickett were all listed as did not participate.

Rodgers had a scan done on his left shoulder earlier this week.  The Packers are expected to announce his status for Sunday’s game today.