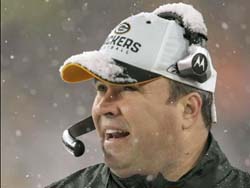 coaches that the University of Texas has interest in as a replacement for coach Mack Brown, who stepped down from his job last week.

ESPN’s Chris Mortensen has McCarthy on a list of coaches which includes Jim Harbaugh of the 49ers, Pete Carroll of the Seahawks and Chip Kelly of the Eagles.

McCarthy has ties to the Austin, Texas area, where he has a home on Lake Travis.  He hasn’t been in the college game since 1993.

Harbaugh has told the 49ers brass that he has no interest in such a move.  Meanwhile, Mike McCarthy told the media at his Monday news conference that he and his family are tied to Green Bay and he’s honored to be the head coach of the Green Bay Packers.

AUDIO: Mike McCarthy asked about his name coming up for the U of Texas job :14