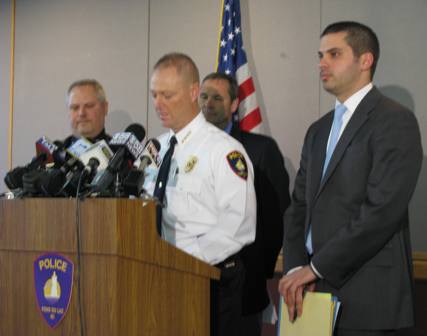 Police and prosecutors in Fond du Lac suspect the wife of a man who was reported missing of murdering him over extramarital affairs. During a press conference Tuesday afternoon Fond du Lac Police Chief Bill Lamb said Eve Nance had admitted to investigators that she got into an argument with her husband Timothy at their home on November 1st and had killed him. An autopsy revealed he had been shot twice in the head.

According to the criminal complaint she wrapped the body in plastic sheeting and took it to Milwaukee where she dumped it in a wooded area off the end of the 6200 block of N 101st Street. Fond du Lac County District Attorney Eric Toney played it close to the vest in answering reporters questions not wanting to jeopardize what is an ongoing investigation. “A criminal complaint has been filed . . . I’m not going to comment beyond that,” he said.

Eve Nance will be making an initial appearance in court Wednesday morning on 1st degree intentional homicide and hiding a corpse charges. Timothy Nance’s friend Rodney Emerson says it is some closure. “All we wanted to know was where he was,” said Emerson. “I was not going to accept in my mind that he was dead until a body was recovered.” Eve Nance’s sister Tina Ewell, who was arrested with her on November 20th, has been released from custody.