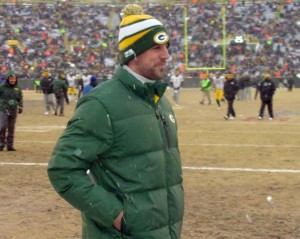 weeks where he practices for two days and a decision is made on Friday won’t be followed again and it’s possible a decision on his status could come in the next 24 hours.

McCarthy said, “This is something clearly, after seeing Aaron practice for two weeks, this is something Ted Thompson and I need to sit down and we need to assess all the information and decide if it’s time for him to play.”  “Aaron wants to play, has wanted to play for the last couple of weeks.”

It will be eight weeks on Sunday from the time that Rodgers suffered the cracked collarbone against the Bears and if Thompson isn’t convinced his quarterback can withstand another hit to his left shoulder, he’s not going to put him on the field.

It will be interesting to see if Thompson’s opinion on Rodgers is swayed by the recent injury to linebacker Clay Matthews.  Matthews returned to the lineup about a month ago with a club like cast after breaking his thumb and missing some time.  As the weeks have gone by, the cast has been reduced in size, until he re-injured that thumb in Sunday’s loss to the Steelers.

Matthews broke the same thumb and is expected to miss the remainder of the season.  Mike McCarthy said at his news conference that the training staff was still evaluating the injury, but it didn’t look good.

Matthews scenario could possibly weigh on Thompson when it comes to deciding whether or not to take the risk of bringing Rodgers back this Sunday against the Bears.  Thompson has generally been very conservative in these types of situations and seeing Matthews go down again, could affect his thought process on Rodgers.

The Packers and Bears are meeting Sunday at Soldier Field (3:25pm) for the NFC North Division title and a spot in the NFC playoffs.  That playoff spot also carries a first round home game with it.  After everything that the Packers have gone through, to have the chance at a first round home playoff game would be quite an accomplishment.

AUDIO: Mike McCarthy says he and Ted T. will assess the situation :15