You are here: Home / Packers / Rodgers to be evaluated on Wednesday

One day after the Green Bay Packers pulled out a 37-36 win over the Dallas Cowboys, head coach Mike McCarthy was back to addressing questions about the team’s quarterback position.

AUDIO: Mike McCarthy on the plan for Aaron Rodgers :11 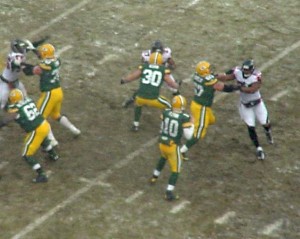 Will be see Matt Flynn against Pittsburgh on Sunday?

Sunday against the Pittsburgh Steelers.  That could change if Rodgers is cleared from the fractured collarbone that has kept him on the sidelines for the last six games.

Rodgers thought he was well enough to play last week, but the organization felt it was in his best interest to sit out despite practicing without pain last week.  The fact that Rodgers practiced without pain is a good sign though and it means he’s getting closer to being able to return.  Whether that return comes this week or not will be determined by the Packers team doctor on Wednesday.

Matt Flynn struggled in the first half on Sunday but he got it together to start the second half and ended up throwing for 299 yards and four touchdowns.  The second half difference had a lot to do with Flynn being able to move through is progression of receivers.

AUDIO: Off. Coord. Tom Clements says Matt Flynn set his sights on 1 receiver for too long :23

Flynn has started the last three games for the Packers, winning the last two.