You are here: Home / Packers / Rodgers to the rescue in Packers comeback win

After being knocked out for eight week with a broken collarbone, Aaron Rodgers finally returned to the lineup on Sunday and helped the Green 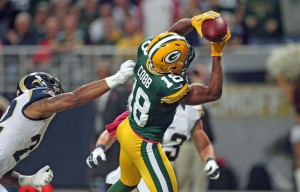 Bay Packers beat the Chicago Bears 33-28 to clinch the NFC North Division and a home game in the opening round of the playoffs next week.

Rodgers was intercepted twice in the first half, but he rebounded with a 4th quarter comeback that his coach (Mike McCarthy) says he’ll remember for a long time.

AUDIO: Mike McCarthy on the game winning TD pass from Rodgers to Cobb :22

The win gave the Packers their third straight North Division title and a 5th straight trip to the playoffs.  By winning the division, the Packers claimed the 4-seed in the NFC playoffs.  They’ll open this Sunday (3:30pm) against the San Francisco 49ers (12-4) at Lambeau Field.

The Packers were down by 1-point when they started their final 87-yard game winning drive.  Three times on the drive, the Packers went for it on fourth down and converted, with the game winning 48-yard touchdown pass from Rodgers to Randall Cobb coming on 4th and 8.  The Bears came with an all out blitz and Packers fullback John Kuhn made an adjustment to get Chicago’s Julius Pepper blocked.  That allowed Rodgers to elude Peppers and hit a wide open Cobb for the game winning score.

AUDIO: Cobb said when the pass was on its way, he had many thoughts :14

Rodgers finished 25 of 39 for 318 yards, two touchdowns and two interceptions.  He started slow, but the shootout that everyone expected was on in the second half.

He eluded sacks with his feet and audible out of trouble all day.  He said it’s been a roller coaster season, but called this win a special moment.

AUDIO: Aaron Rodgers said this is a special moment :23

Rodgers had plenty of support in the win.  Wide receiver Jordy Nelson caught 10 passes for 161 yards.  Packers running backs Eddie Lacy and James Starks combined for 153 yards on the ground.

Now the Packers will try to exact revenge on the 49ers.  San Francisco beat the Packers in last years divisional playoffs, then again this year in the season opener.  Both wins came in San Francisco.  The Packers are hopeful that getting the 49ers in Lambeau Field this Sunday will make the difference.