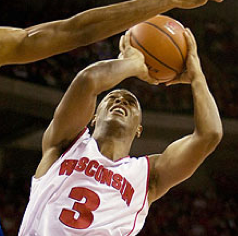 Dec. 2, 2009. When Wisconsin and Duke met in the Big Ten/ACC Challenge in 2009, the Blue Devils were considered heavy favorites. They were a perfect 6-0, ranked 6th in the country, and they hadn’t lost in a Challenge game in ten previous seasons.

That all began to change when Wisconsin grabbed a 19-9 lead to start the game. Guard Tim Jarmusz says the team was confident it could knock off the Blue Devils, especially after the fast start.

“You never go into a game thinking you’re going to lose,” Jarmusz says. “You start hitting a few and you get the crowd involved and everyone starts feeding off each other, and it just sort of snowballs.”

Wisconsin went on to win the game 73-69, bringing its record to 5-1 and handing the Blue Devils their first loss of the year. Trevon Hughes led the Badgers with career high 26 points — 19 of them in the 2nd half.

The win also ended Duke’s 10-game winning streak in the Big Ten/ACC Challenge, and avenged an 82-58 blowout by the Blue Devils just two seasons before. It was one of the high points of a very good season for the Badgers, who finished that year 24-9 and advanced to the 2nd round of the NCAA Tournament.