You are here: Home / Packers / Snow forecast for Lambeau Field on Sunday 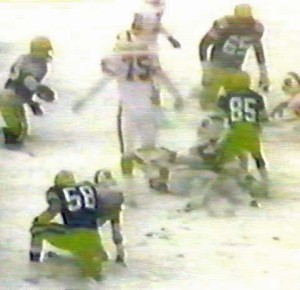 Pittsburgh Steelers at Lambeau Field.  Weather could be a factor for the game.

While meteorologists have yet to pin down the exact path of the storm, some are making early predictions of 6 inches or more, to fall throughout the day and the game.

The Packers won’t necessarily gain any advantage with that type of weather.  Pittsburgh plays in the same climate and conditions.  In fact, the Steelers have already played a game in heavy snow, falling the Dolphins a couple of weeks back.

The last storied snow-game at Lambeau Field dates back to December 1, 1985 when the Packers blanked the Tampa Bay Buccaneers 21-0.  Snow started the night before and came down heavy all-day.  The storm was so bad that many people who had tickets either stayed home or made an attempt to get to Lambeau Field and decided to turn back (like myself).

More than a foot of snow had fallen as the two teams played in near white-out conditions that day at Lambeau Field.  The official attendance for that game is listed at 19,856.

The Packers just opened the gates and anybody who wanted to come in and watch from the neighborhood, were allowed in without a ticket.  In the stands, the players were hard to see, let along identify.

Those that showed up, had the time of their life.  Lambeau Field hasn’t seen a storm like that since.  But who knows, maybe Sunday’s game against the Steelers will bring back memories of the 1985 Snow Bowl game.