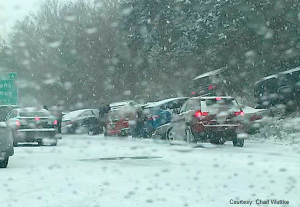 Snow and icy roads are blamed for at least three traffic deaths in Southern Wisconsin Sunday.

One of them was a man in a Racine County crash along the interstate near 2-Mile Road. Another person was killed in a Milwaukee County rollover crash on Interstate 43, and the third death occurred in Dodge County.

State Senator Kathleen Vinehout, a possible candidate for Governor, was in a vehicle caught in one of the Racine County crashes, which seemingly kept the interstate closed more than it was open during — at times — whiteout conditions.

An unattended Racine County squad car was also rear-ended and heavily damaged by an out of control driver. Every tow company in the area was brought to the interstate at one time because of so many vehicles involved in crashes.

Most of the other injuries were minor, though one broken arm was among those more serious. Hospitals in Racine and Franklin were flooded with patients, as well as Froedtert in Milwaukee.