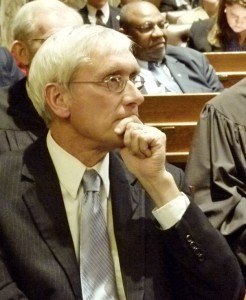 State public school Superintendent Tony Evers explains to a panel of lawmakers in Madison that rural schools need help dealing with rising costs and declining enrollments, among other things. “More than have of our Wisconsin school districts have fewer than 1,000 students. Many are dealing with increasing levels of poverty and declining enrollment, which means they receive less state aid to the kids,” he says, “at the same time small rural districts have average costs to education students that is higher than the statewide average.”

Evers blames a faulty school funding formula. Using a baseball analogy, Evers says just as small market teams struggle to compete against bigger teams with more resources, rural school districts are losing some of their best teachers to bigger districts where there’s more state aid and competitive wages. “I’m gonna say this with all due respect. This isn’t a slam on Act 10 or anything,” he says, “but the fact of the matter is it’s more of a free market now than it’s ever been before; and when you have a completely free market like that you’re going to have some losers. I’m fearful that the rural schools are in that position.”

Evers says rural districts face many unique challenges, including the cost of transportation, the need for better technology, recruiting and retaining good teachers, and declining enrollment.

Jerry Fiene is executive director of the Wisconsin Rural Schools Alliance. He says not all Wisconsin students are given an equal opportunity to a sound basic education.