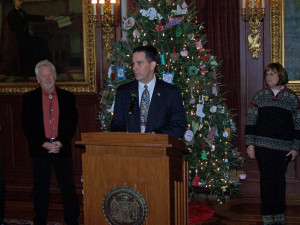 Governor Scott Walker says a widely criticized fundraising email sent by his campaign is “certainly not something I would have put out.”

The message sent last Friday by Walker’s deputy campaign finance director urged recipients to donate money to his campaign and give their kids “the gift of a Wisconsin that we can all be proud of,” instead of spending it on Christmas presents that “will undoubtedly be outdated, broken, or lost by the next Holiday Season.”

Talking with reporters Thursday after lighting the Capitol Christmas Tree, Walker noted that the staffer who sent the email is no longer with his campaign, although for different reasons. Taylor Palmisano was fired earlier this week, after a pair of offensive tweets she posted on Twitter in 2011 were made public. In them, Palmisano demeans Hispanics, even threatening to choke a janitor cleaning a library.

The governor says he was not aware of the posts until this week, but took quick action once they were brought to the campaign’s attention. “We didn’t know about them. I think, like most employers, we don’t spend time going back trying to find out years and years ago what people may or may not have said on social media. But obviously, when it was brought to our attention, it was something that concerned our campaign and concerned me.”