They finished fourth in the Big Ten Conference this season, but the Wisconsin 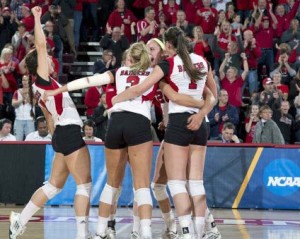 women’s volleyball team picked a great time to get hot and they’re hoping to ride the wave to the schools first NCAA Championship.

The Badgers stunned top ranked and defending champion Texas 25-19, 25-18, 26-28 and 25-23 in the NCAA semifinals at Key Arena in Seattle.  It moves the Badgers into the NCAA National Championship match on Saturday night (8:30pm) against second-seeded Penn State.  The Nittany Lions have won 10 of the last 11 Big Ten titles and have four straight NCAA titles from 2007 through 2010 under their belts.  Penn State swept UW twice during the regular season.

Texas entered the semifinal with 23 straight wins, tied with Penn State for the longest streak in the nation.  The Badgers meanwhile have won six straight matches and nine of the last ten.

Wisconsin was led by junior Ellen Chapman, who tallied 17 kills to pace the Badgers and to tie for match-high honors.  Freshman setter Lauren Carlini, who earned second-team All-America honors on Wednesday, recorded 50 assists and 12 digs for her 22nd double-double.

Senior Annemarie Hickey collected a game-best 21 digs, while Morales chipped in 14 digs to earn her 19th double-double of the season.

Wisconsin also made the National Championship game in 2000, when the Badgers defeated USC in the semifinal game before falling in five sets to No. 1 Nebraska in the championship match.