You are here: Home / News / Capitol doors locked since 911 reopened 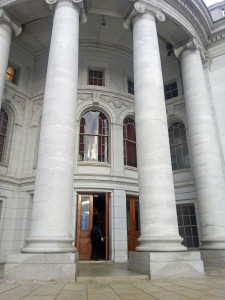 First floor entrances at Wisconsin Capitol are now open after being locked for more than 12 years following the terrorist attacks on 9/11/01. (PHOTO: Jackie Johnson)

First floor doors at Wisconsin’s Capitol are re-opened for the first time since 9/11.

Following the terrorist attacks on America September 11, 2001, all entry ways on the first floor of the state Capitol building were locked as a security precaution. Now, after being closed for more than 12 years, the Department of Administration has reopened those doors to the public.

AUDIO: DOA Secretary Mike Huebsch says this is something he’s been interested in doing for a long time. 1:20

Huebsch says, “Our focus is open and transparent government,” adding that opening the entrances to citizens “is both a literal and symbolic gesture.” He says, “It’s a gesture to make sure that that message is getting across to folks … that when the legislature is in place, when the building is open for regular hours, they are going to  have access to their building.”

For more than a decade people have been entering the Capitol on the ground floor. The newly opened entrances are at the top of the steps on four sides of the statehouse.

AUDIO: Huebsch says the administration is confident with the security plan that’s in place at the Capitol. :20

Not all areas of the statehouse are back to normal, though. There are no plans to allow public access to the Capitol basement any time soon.

While the newly-opened entrances haven’t been providing access to the Capitol building, they continue to be destinations for joggers trying to get their heart rate up and they are prime locations for photographing wedding parties.