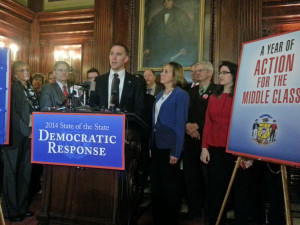 Democrats respond to the Governor’s State of the State speech. (Photo: Andrew Beckett)

Democratic leaders in the state Legislature say the governor’s proposed “Blueprint for Prosperity” is not responsible.

Governor Walker outlined a plan Wednesday night in his State of the State address that would use some of a projected state surplus to help pay for more than $500 million in property and income tax cuts. Senate Democratic Leader Chris Larson (D-Milwaukee) says the proposal will add to a structural deficit in the next budget, and compared it to “parents paying for a graduation party with their children’s college fund. It’s just not responsible economic policy.”

Democrats are calling for a more balanced approach with a surplus that’s projected to be close to $1 billion at the end of the biennium. Assembly Minority Leader Peter Barca (D-Kenosha) says that can include tax cuts, but it should also focus on restoring funding to education that was taken out in recent state budgets. The Kenosha Democrat says not putting that money back in during a time of surplus is “short-sighted, and it’s a huge mistake.”

Assistant Assembly Minority Leader Sandy Pasch (D-Milwaukee) says the timing of Governor Walker’s proposed tax cuts should be carefully considered. “I think the most important thing to remember is this is an election year, and this looks like a reelection political move, instead of truly investing in what will grow jobs and the quality of life for the people of Wisconsin.”

On the other side of the aisle, Republican Assembly Speaker Robin Vos (R-Rochester) says he “feels very confident that this broad outline is something that we can support, because there’s no doubt it’s in the best interest of Wisconsin.”

The governor’s proposal could face a tougher road in the state Senate though, where Majority Leader Scott Fitzgerald (R-Juneau) says he doesn’t know yet if he has the votes to pass it. Fitzgerald says some members are concerned about the impact the cuts could have on the state’s structural deficit in the next biennium. The Juneau Republican says they will spend the next few days “going Senator to Senator” to talk to them about the package.