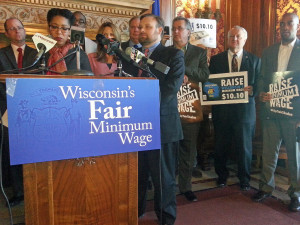 Along with his Democratic colleagues and a few low-wage workers by his side, state Representative Cory Mason of Racine introduces ‘Wisconsin’s Fair Minimum Wage Act’ bill. “This is a bill which, once enacted, would raise the minimum wage ultimately to $10.10 an hour.” Mason says, “It’s a critically important piece of legislation that would make a tremendous amount of difference in the lives here in Wisconsin for 633,000 workers.”

Darnell Summers is a 57-year-old, part-time fast food employee making $7.25 an hour. He says, being an able-bodied worker, he should not have to depend on a Quest card for food. “All I ask is gimme a life raft and I’ll take it from there. That’s what this minimum wage bill is to me. It’s a life raft. If it’s not passed, we’ll all keep drowning.”

Under Mason’s proposal, the minimum wage would gradually increase to $10.10 an hour over the next two years — starting first upon the bill’s passage at $8.20, then a year later it would jump to $9.15, and finally up to $10.10 a year later. It would then be indexed to the rate of inflation every year thereafter. Wisconsin’s current minimum wage is $7.25 per hour. Wages for those workers earning tip money will be adjusted and indexed accordingly.

Governor Walker and Republicans argue this policy could end up hurting workers because employers will cut jobs in order to make up for the higher wages being paid. Mason disputes that theory, saying the facts just don’t support it. Walker has said he’d much rather have lawmakers focus on job training.

AUDIO: Mason says, according to polls, the working citizens of Wisconsin support an increase, regardless of political party affiliation. :21

There’s federal legislation being proposed, but Mason says Washington is broken so each state needs to act on its own. There are 46 cosponsors on the bill, none are Republicans, who have the majority in the legislature. Without their support, the bill has no chance of passage.