You are here: Home / Legislature / LeMahieu retiring from state Assembly 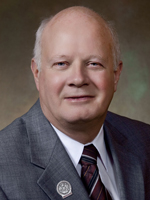 State Representative Dan LeMahieu (R-Cascade) says he plans to retire at the end the current session.

The Cascade Republican, who has served six terms in the Legislature representing the state’s 59th Assembly District, released a statement Friday making the announcement. He says “It has been an enjoyable 12 years and I’m grateful for the friends I have made in the legislature and in state government. I appreciate all of the help and support I have received throughout those years.”

LeMahieu spent the last four years serving on the Legislature’s Joint Finance Committee and notes that he helped fashion “two of the most conservative budgets that Wisconsin has seen in over 20 years.” He also led an effort to review and clean-up the state’s administrative rules.

LeMahieu says he’s looking forward to traveling more with his wife, Rosemary, and spending time with his grandchildren.