You are here: Home / Packers / Packers get more time to sell remaining tickets

The Green Bay Packers have been given another day to sell the remaining 3,000 tickets for Sunday’s NFC Wild-Card playoff game in order 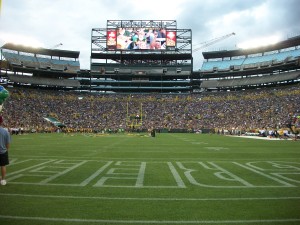 to avoid a TV blackout.

The Packers now have until 4pm Friday to see the tickets or face a blackout in the Green Bay, Milwaukee & Wausau markets.  The last time the Packers had a game blacked out was an NFC first-round playoff game against the St. Louis Cardinals in 1983.

What’s making life difficult on the Packers is Sunday’s forecast, with a temperature dipping to 5-below zero by kickoff and temps falling even further.  Wind chills will start around 30 below.  If that forecast holds, Sunday’s game would be the second coldest in franchise history.  The coldest game played was the 1967 Ice Bowl when temperatures reached 13-below zero.  The next coldest game was played Jan. 20, 2008, a playoff game between the Packers and the Giants when the temps reached 3-below and a wind chill of 24 below.

The Packers sent out invoices for playoff tickets in late November and 40,000 tickets went unsold, which is the number the Packers started with at the beginning of the week.

Given the frigid forecast, it’s understandable why tickets might be a tough sell.  Certainly back in November, the Packers were in the midst of a bad stretch, playing without Aaron Rodgers and there was no guarantee they’d even reach the playoffs.

The teams new ticket policy could also have turned many fans off.  Under the new policy, season-ticket holders were given the opportunity to fuy their allotment of up to four playoff tickets.  They had to pay in advance for two playoff games, and if the Packers didn’t make the playoffs, the money would have been applied to next year’s season tickets.

In short, fans were being asked to commit more than $1000 with the possibility of the team not making the playoffs and the Packers holding their money until next year’s tickets came due.  In past years, fans had the option of getting the money refunded.

I ran across an article from ESPN.com’s Kevin Seifert on the issue in question.  It explains some of the potential reasons why the Packers and other teams are finding it difficult to sell tickets, and how they might be able to avoid some of these issues down the road.

Click on this link to view Kevin Seifert’s column.